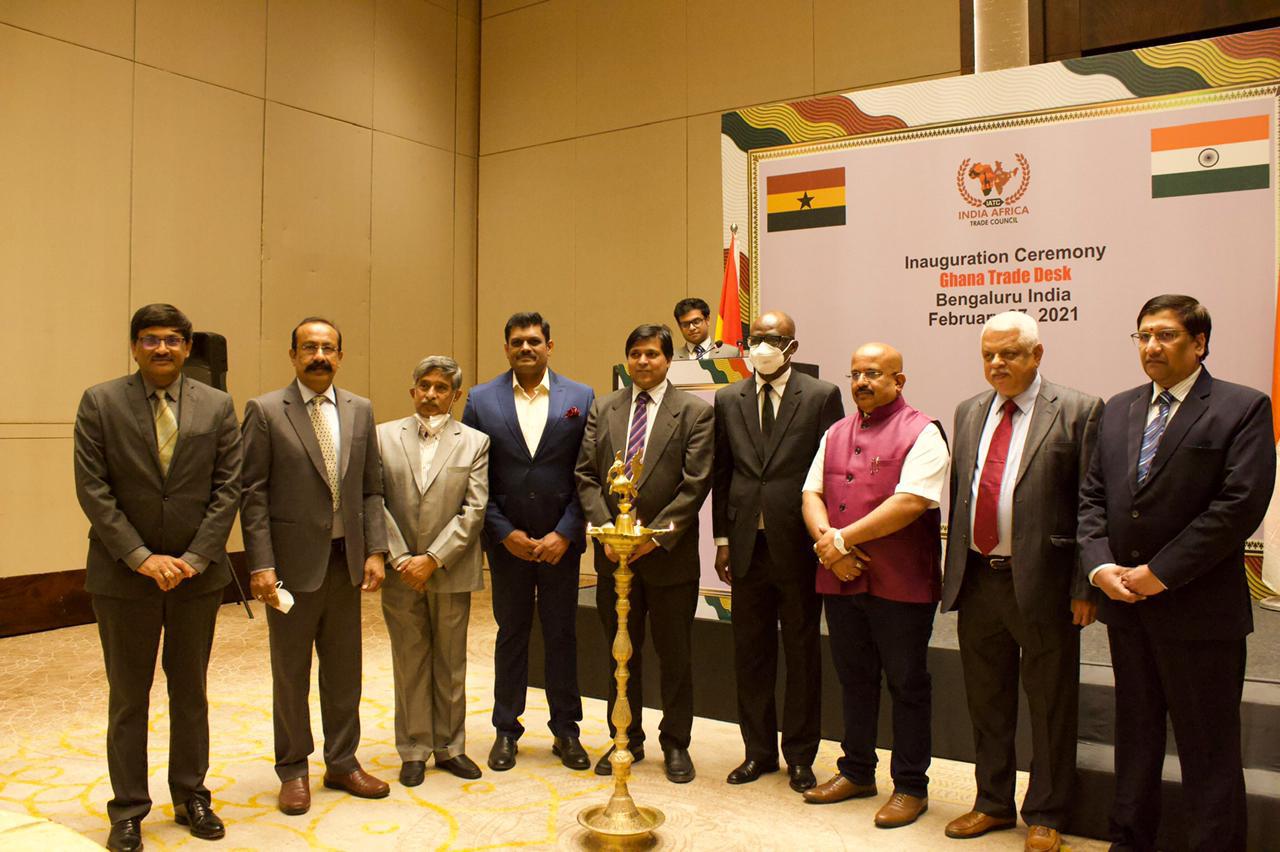 The Indian Economic Trade Organization jointly with the India Africa Trade council organized the India Economic Dialogue in African Continental Free Trade Area. The agenda for the conference was to brainstorm the ideas that may be used to reinforce India Africa Partnerships.

It was the first dialogue from the series of conferences planned in future. The session was moderated by Ernest Nana Adhjei, Minister-counsellor/Political and end Economic, Ghana High Commission. There was a huge interest shown by India to expand the business in the region. Similar response was received from the other counterparts as well. Each member present showed their interest in providing support for the development of both the regions.

The first speaker for the event was Mr. Varun Jain, chairman of India Africa Trade Council. He also runs a beverage company in India. He started his speech by appreciating the friendship and history that the region shares. He further congratulated the African nations and their leaders for the development of the regional and subregion continent. He also pledged to provide all his support for the development of trade and business. He also showed his confidence in the fruitful partnership that the region can develop and continue the ease of doing business. He ended his speech by promising to work towards the objective and it’s expected benefits for the Indian companies. AfCTA is a great attempt by the African nations to provide Africa with prosperity. It seeks to create a single market. He ended his speech by shifting the focus on the market of Africa, which is expected to reach about 1.7 billion by 2030. With about 6.7 trillion dollars as consumer and business spending. The step towards removing the tariffs of about 90% goods is not only good news for the region but also for India to expand the business. Successful implementation of AfCTA is expected to grow Africa’s intra trade by 56%, this will also help in generating more skilled and paying jobs in the region. All this also holds a great opportunity for the manufacturing sector.

The second speaker for the session was Her Excellency Dr. Tizita Mulugeta, Ambassador of Federal Democratic Republic of Ethiopia. She spoke on Women in informal cross-border trade, gender analysis. She started her speech by stating the Africa trade statistics, which shows that the regions 80% of the trade is around the world. And intra africa trade counts to be around 10%. She further compared these statistics with other regions around the world. It was observed that the EU has approximately 70% of intra regional trade, 54% in north America and 51% in Asia. These statistics clearly point out the potential that Africa holds to enhance the intra regional trade, and the agreement will help accelerate the process. She mentioned how the agreement will help the women in the region, as the majority of them are involved in the cross border trade, which are close to the borders. The women accounts for 70% of the informal sector, this points out the crucial role they play in the cross border trade. This will also help the vulnerable communities around the border. This agreement will help in development of low income groups and in particular women traders by enhancing their cross border trade. In Ethiopia as well, women are active participants of cross border trade, majorly with Sudan,Kenya, Djibouti, Somalia. Women in cross border trade can also channel the long term development prospects of African nations. By reducing the unfair competition and generating consumer welfare. She further said that the agreement can be helpful in rural areas. General impact of informal trade faces many challenges and agreements like these will help them overcome such challenges and will reduce the corruption opportunities. She also pointed out the special rule in the preamble to finish the gender gap and enhance trade with the help of the agreement. And the infrasturctural development that has been taking place in the region for better movement of goods. This also showed the importance of agreement in enhancing such projects and attracting further development.

She also mentioned how India can be benefited with all the development taking place in the region and how free movement of goods can be a good opportunity for the Indian businesses to expand their business. Non tariff barriers which cause the restrictions in trade can also be reduced with the implementation of the agreement, this will further help the women traders in the region. This will particularly help the women in the agriculture sector, by providing access to cheap procurement of raw material. Formalisation of cross border trade is also one should look at.

Next speaker was Dr. Asif Iqbal, President Indian Economic Trade organization. He spoke about the strengths and opportunities of Africa-India 2030 dialogue. He appreciated the culture, economic and friendship shared by the two regions. He further appreciated the efforts put forward by the African nations to sign the free trade agreement, AfCTA. Although not much could have been done due to the pandemic, but Mr. Iqbal assured everyone present at the conference for many more country and product specific conferences to take place. He also assured that the council will identify various sectors and industries, where India can provide its assistance to Africa and both nations can grow. He continued his talk by focusing on how free movement of goods and humans could help the region increase its economic activities in the coming years. The long road map for Africa includes the technological advancement, and there is no better time than this to offer trade in Africa. To talk about a few opportunities for the region, Ivory coast’s cashew industry is one, where the country has the potential but lacks the manufacturing set up. Another such example quoted by Mr. Iqbal was the Diamond industry of Botswana and how the country will manage the duty loss due to the tariff free movement of the goods. He further compared African region with the map of India’s. Just as one can travel freely from Srinagar to kanyakumari, one can easily travel from one point to another freely once the free trade agreement is implemented in the region.

H.E Mr. Gilbert Shimane Mangole, High Commissioner of Republic of Botswana, was the next speaker in line for the conference. He spoke about the Evolution of trade Policy in Botswana through AfCTA. He started his talk by bringing everyone's attention towards the efforts that are being made by the Botswana government to change their laws to domesticate the rules of the free trade agreement for the better implementation. He further assured everyone the commitment of the government to obligate the agreement and the efforts to make it compatible with the domestic laws. He assured that the custom officials will soon be provided with the appropriate training as per the new agreement standards. He further said that the actions by the government might be slow but officials in the nations are working diligently towards slow but effective implementation. As this will not only help the small population of about 2,1 million people to grow economically but also help them with easy access to the other goods and services at an effective rate. He also pointed out how free trade agreement can help the Beef industry of Botswana, which holds a great potential to be exported to neighbouring countries. The MSME sector will also be benefited with the proper implementation of the agreement. Another important sector which could act as a comparative advantage to the nation is the Veterinary vaccine. Which operated under its potential, and private investment could boost the industry.

Mr. Sebastian Beliwine, Acting Head of Mission Ghana High Commission congratulated everyone for the achievement to bring AfTA together. He also shared how inclusiveness characteristic of the agreement could help nations share the economic growth. He further emphasised on the importance of generating awareness among the nations regarding the agreement, and how new trade can go beyond the traditional trade flows. He also focused on how this could be helpful in empowering the women, MSME in the region, as they hold the majority stake in the trade. And ended the talk by stating "together we can"

He was followed by D.K. Giri, professor at Jamia university. He talked about the history of European Union and how it has helped the region in economic development. He also talked about the similarities between the EU and AfCTA, and how it can boost the development process of the region. Major general (rtg.) Sanjay Soi followed him to talk about the scale of the private security industry in India. He shared how his organization has been providing all kinds of new generation private security services to all levels of the pyramid.He ended his speech by showing his willingness to expand his expertise service to the african nations.

The last speaker of the session was Mr. Ashish Srivastava, Director Infrastructure at Indian Africa Trade council. WHere he shared the new financial models available and how infrastructure can boost the trade from the land lock companies. He also shared the availability of aid in the region for infrastructure development.

The event was brought to an end by the thanking note by Mr. Mohit Srivastava, Director- Diplomatic Affairs Indian Economic Trade Organisation. He appreciated everyone for the insightful information shared by each speaker. The session concluded by felicitation of Mr. Varun Jain, and launched the World Bank report on Africa Free Trade, known as "The African Continental Free Trade Area: Economic and Distributional Effects." The event was followed by the Lunch, where everyone informally discussed the prospects of business among each other.